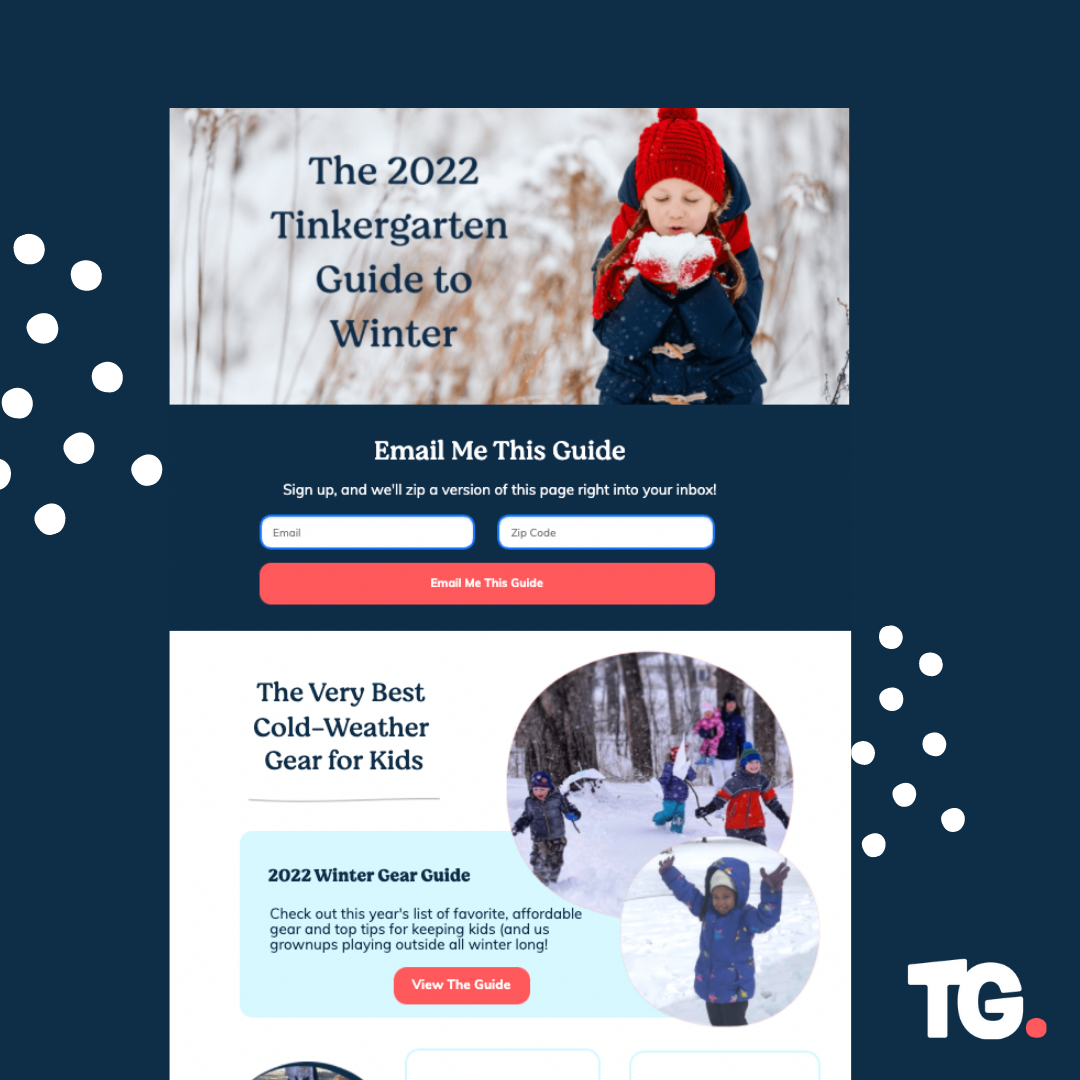 Save Activity
Learn How
Monday, January 24th is Global Belly Laugh Day—a tradition started by a human named Elaine Helle to help remind us of the special power of laughter. At Tinkergarten, we believe in the power of joy and connection—and that is what laughter is all about. So, we hope you find these ways to celebrate helpful on Belly Laugh Day or any day!

Try one or many of these ideas in celebration of laughter:

Laughter is a human experience that impacts our brains, our bodies and our hearts. When we laugh together, it connects us in joyful ways, too. Learning to laugh and strengthening laughter's role in our day to day also gives kids—and all of us—a powerful tool for balancing the harder parts of life. Something that helps kids persist and become more resilient.

What is Sensory Development?

Although some scientists classify as many as 20 senses, when childhood educators talk about "developing the senses," we typically mean developing the five standard senses: sight, hearing, touch, smell and taste. In addition to honing these senses, educators care about sensory integration, which is the ability to take in, sort out, process and make use of information gathered from the world around us via the senses.

The better kids are able to tune and integrate their senses, the more they can learn. First, if their senses are sharper, the information kids can gather should be of greater quantity and quality, making their understanding of the world more sophisticated. Further, until the lower levels of the brain can efficiently and accurately sort out information gathered through the senses, the higher levels cannot begin to develop thinking and organization skills kids need to succeed. Senses also have a powerful connection to memory. Children (and adults) often retain new learning when the senses are an active part of the learning. So, if kids have more sensory experiences, they will learn more, retain better and be better able to think at a higher level. Makes the days they get all wet and dirty in the sandbox seem better, doesn't it?
​

Simply put, empathy is the ability to think and care about the feelings and needs of others. The good news is, the more we study, it appears that children are empathetic by nature. All we need to do is nurture it in them—that of course is now always easy. Even though young children are simply working on gaining control over their emotions and won’t learn to really think about their emotions and the cause and effect of their behavior on others until their school years, they can start to develop the foundation for empathy much earlier. Taking actions (and watching adults take actions) that benefit other people, caring for animals and their environment and even just wondering how other people or creatures are feeling helps build both positive habits and a strong base for the development of empathy.

Empathy is at the root of what psychologists call “pro-social” behavior—behavior that people must develop in order to develop a conscience, build close relationships, maintain friendships, and develop strong communities. Empathy also helps kids avoid bullying, one of the most worrisome social challenges young kids face. Being able to think and feel for others can keep kids from becoming either bully or victim and equip them to stand up for others who are bullied. Imagine if all kids had such tools!
​

What are Persistence & Grit?

A persistent person can continue on a given course of action in spite of challenges or barriers that arise. In other words, persistence is the ability to stick with something and keep trying. It's partner, grit, is the strength of character, and sometimes courage, to allow one to persist. Those who possess grit don't mind rolling up their sleeves, focusing on the task at hand, and sticking with it to completion despite the challenges that come their way.

Talent is helpful, but it's hard work, persistence and grit that unlock talent and turn capable people into success stories. As Thomas Edison so famously said, "Genius is 1% inspiration and 99% perspiration." Practice with being persistent, including the chance to struggle and learn how to overcome struggle, will help kids later have ability to wade through and make sense of confusing new information, navigate difficult situations, and solve tough problems.

Further, studies like those discussed in Po Bronson and Ashley Merryman's NurtureShock tell us that kids will actually perform better when we praise their hard work instead of just telling them how smart or great they are. As parents, we also tend to offer kids activities which are enjoyable and attainable and, as such, too easy. Bear in mind that if we spare them frustration, we actually deny them the chance to work hard and develop persistence and grit.

What is Self Reliance?

Nearly all parents agree that we want to raise our children to become independent and self-reliant people. When they are babies, children rely on us for their basic needs and mobility. As they grow, they rely less directly on us for these basic needs but still need us for love, protection, direction and help. As they grow into adolescence and early adulthood, they will rely on us less and less, separating from us to prepare for the transition to adulthood. Even though much of the separation dance plays out during adolescence, how we offer our kids both support and independence in their early years paves the way for them to develop self reliance later on. Many well-intending parents may become too involved, protective or demanding of their children and, by doing so, actually foster dependence in them. In turn, their kids grow to rely on others for motivation, happiness and direction, unable to make sound decisions for themselves. Independent children, however, possess the belief that they are competent and capable of taking care of themselves. They were given the freedom to experience life and learn its many important lessons, both the joyful and the not-so-fun ones that come from taking risks and doing things for and by oneself.

Independent children emerge as intrinsically motivated, natural explorers. They are capable decision makers who have had practice weighing various options and, with the support and guidance of their parents, have been allowed to and lived by their own decisions. This kind of self reliance helps children navigate all realms of life. Academically, they advocate for themselves, take chances and try new things. Socially, they are less dependent on others for happiness, making them far more likely to weather the ups and downs of young friendships and social power dynamics. They have likely had the chance to identify and pursue their own interests and, therefore, have a rich sense of self. They are also more likely to make sound judgements and far less susceptible to engage in negative behaviors, succumb to peer pressure or become either bully or victim. As children grow into adulthood, these same patterns continue to play out. Self-reliant adults have an easier time feeling happiness, self-respect and the respect of others. They are better decision-makers and often accomplish more given the self confidence and self awareness that comes from having been allowed to try, succeed, fail and learn along the way.   “Trust thyself: every heart vibrates to that iron string.” - Ralph Waldo Emerson, Self-Reliance